On this blog before I have mentioned the audio creation tool Gabcast before, however since they started to charge for their service, I know that a lot of people have been trying to find a free alternative. Now generally I don’t have a problem paying for software or services if they get the job done or make my life easier.

I have gone Pro with my Flickr account so that I can upload lots of photographs and not be limited to the 200 images of the free account. I have upgraded my Remember the Milk account so I can use it on my iPod touch (and now on my new iPhone). I have paid for the extra storage on this WordPress Blog so I can upload video and audio (which is well worth the $20 per year it costs). Though like others I like free software, when I need something for a particular job I don’t mind paying for good software. VisualHub made video conversion easier (now reborn as it happens as the free Video Monkey). When I needed good audio tools, I went with Wire Tap Anywhere and Wire Tap Studio which met my podcasting needs on the Mac. So I actually had no qualms about paying $10 for 100 minutes on Gabcast.

However I can’t expect everyone to do that, especially practitioners and teachers who may not want to spend lots of dollars money on minutes for Gabcast. It’s one thing for me to spend $10 for events and workshops, but if I used Gabcast for my weekly podcast I would be spending about $40 per month!

So what is this Audioboo.fm that is the title of this blog post then?

Well it’s a service I first saw demonstrated at the All Together Now event at Channel 4. To put it simply it is an App (iTunes Store Link) on your iPhone that allows you to record an audio recording, add your location, a picture and upload the lot to a website.

As well as viewing the “boos” on the website they are also accessible via the Audioboo App. 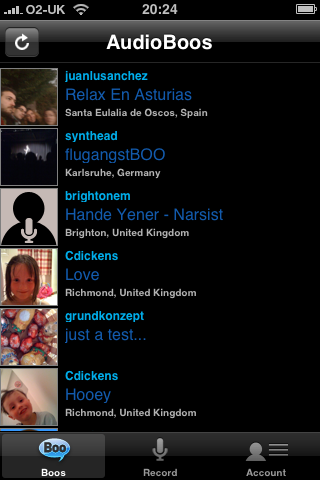 As you have an account on the website (not essential but recommended) your recordings are kept together and also have an RSS feed as well.

This is the test recording I made using the App on the iPhone.

Yes I can hear you saying that this is no Gabcast replacement, firstly you need an iPhone and most people won’t have one of those.

Well the Audioboo people are also looking at how they can make the service device agnostic and they have a prototype phone service now in beta. You can phone in your Audioboos via 0203 393 6430. This is a recording that I made using this number on my Nokia N73 (though of course you can use a BT line if you so wish).

Now at this point in time you can not collate these phoned in recordings (as you can with Gabcast) but I am sure at some point that this will be possible (either via your phone number or channel numbers and passwords). I suspect there may also be a web client as well which could be useful too.

So it is early days, but I think Audioboo has a lot of potential.

This entry was posted on Friday, April 10th, 2009 at 8:59 pm and is filed under atn09, audioboo, audioboo.fm, gabcast, iphone. You can follow any responses to this entry through the RSS 2.0 feed. You can leave a response, or trackback from your own site.