To Retweet or not to Retweet

Twitter for me is becoming more and more a useful tool to support me in my day to day job. It is my community of practice. From Twitter I gain useful links, advice, ideas, events; I build relationships which allow for collaboration, projects, conferences and more.

Twitter is slowly replacing a lot of my e-mail communication as it is faster and more useful.

One of the strengths of Twitter has been the RT or re-tweet, the way in which you “forward” tweets from someone in your network to others who follow you. Not everyone who follows you follows all whom you follow. Make sense? Well look at it this way, at the time of writing David Sugden @dsugden follows me. He follows 74 people. I follow 421 people.

So I see something that I think is worth sharing from one of the 421 people I follow, so I retweet it, this way David sees it as there is a good chance he won’t have seen it. Likewise the 1309 people (minus spammers) who follow me will also see it.

Well I do it and I do it for a variety of reasons. 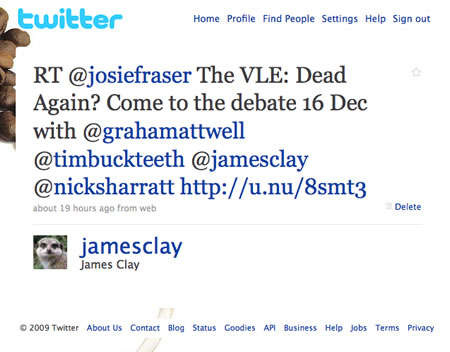 I RT’d this Tweet as I thought my followers would be interested in knowing that there was to be another dead VLE debate. Not everyone who follows me follows Josie Fraser.

One of the attractions of Twitter for me has been the simplicity of the interface and concept. Despite numerous tools available for Twitter, on my desktop I have stuck with the web interface.

One of the (many) reasons I don’t like (and as a result don’t use) Facebook is the complicated interface and features – well that and all those annoying bits like poking, zombies and farming…

Twitter though has started to add extra functionality and features to the service.

Some of these have come from the community, for example using @ to reply to someone was something the community brought to Twitter and was added to the system, as was the # hashtag to allow users to easily search for tweets about events, places, conferences, coffee, etc…

Now something new has arrived from Twitter, they have integrated retweeting into the web interface.

Unlike the simple RT @name and then quote they have used a very different system. What happens is if I retweet somebody’s tweet, that tweet in it’s entirety appears in my followers Twitter stream with a little note that says that I retweeted it.

Now I know some may get confused with this, thinking I don’t follow that person why has their tweet appeared in my stream… Twitter have come up with a pop up box that may allay that confusion.

Likewise the system doesn’t allow you to edit or add a comment. However though Twitter have added this functionality, you don’t need to use it, you can as I am sure I will continue to add RT and edit the retweeted post.

This though has some issues, especially in the way in which some people edit the post or add extra content.

Back on the 22nd October I posted the following tweet about the Windows 7 Burger. 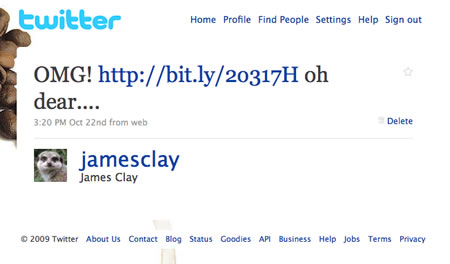 I got retweeted by Stephen Hodge.

Now it would appear that I said I really really want a BurgerKing but I didn’t, I don’t even go to Burger King!

I did think about correcting Stephen, but didn’t really think it would change anything, so just left it. But I am guessing some people may have thought I wanted a burger!

The new way of RTing from Twitter will stop that happening, but also means that things like this won’t happen!

People use Twitter in many different ways and that’s always going to be a part of the issue of whether to RT or not to RT. You may want to have a look at my previous blog post on Ten things people say about using Twitter, but really they shouldn’t that looks at the way in which many people tell you how to use Twitter.

The problem with RTs is that yes you may see the same thing a few times, but remember the one time you see something once and then you will value the RT. Don’t ask people not to RT, if you don’t like what they’re doing, don’t follow them, others may value their RTs.

This entry was posted on Wednesday, November 11th, 2009 at 9:52 am and is filed under josie fraser, twitter. You can follow any responses to this entry through the RSS 2.0 feed. You can leave a response, or trackback from your own site.

2 Responses to To Retweet or not to Retweet