I am currently at the JISC RSC SW HE Conference in Bristol today. I am trying out a new video streaming service, Qik.

Qik allows you to stream live video to the internet from your phone. Qik also records and stores the video so you can view it later.

Both the live video stream and the recorded videos can be embedded into a web page or a blog post in a similar manner to Youtube videos.

Unlike Shozu which allows you to post a recorded video from a phone online, Qik allows you to stream the video live. So as you film, it is available online on the web.

It is similar to Ustream or Stickam, however those services generally use a computer to capture and stream the video, Qik uses a phone. I am using a Nokia N95 with a 3G data connection to do this and works quite well. The Nokia N95 also has wifi capability so you can use wifi if you have that connectivity available.

You can see all my Qik videos here.

Video on the VLE

I have over the years looked at how we can store and use digital video to support and enhance learning. Generally small video clips seem to work better online (just look at the success of YouTube) rather than whole programmes.

Though having said that I am currently enjoying the BBC Archive trial and the BBC iPlayer beta and on both of those I am watching full length programmes. However I am watching it for entertainment rather than educational – raises another question, is there a such a stark difference between entertainment and learning these days?

We are storing video clips we use on the VLE (we use Moodle) using the Flash Video format. Though some staff are using YouTube or TeacherTube.

Our Flash video generally streams “okay” both inside and outside the college.

I have found that using Quicktime H.264 encoded files results in a similar file size, but much better quality. This was particularly evident with the Italian Language programme I used as my example, where the audio was out of sync with the video when using Flash video which would have proved difficult for language students to follow the foreign language. 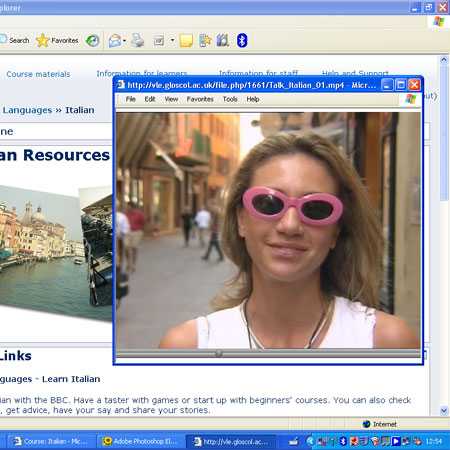 However it does require that the client have Quicktime installed and though this is a free download for users outside the college, the Quicktime player we have installed on college machines is not capable of playing H.264 content.

The main advantage of encoding H.264 was the time it took to encode the files. Though quality and final file size were also advantageous.

To encode a 15 minute MPEG2 Freeview recording took around 15 minutes on my iMac.

To encode the same 15 minute MPEG2 recording as a FLV file took about five to six hours… and then I needed to create a Flash object which contained the FLV video file.

We now have a 15 minute limit on files just because anything longer will take too long to download. For those video recordings/files we put them on DVD and allow the students to view them via a DVD player.

Longer term for larger videos we are aiming to have a media/video server, but this will be mainly aimed at streaming internally.